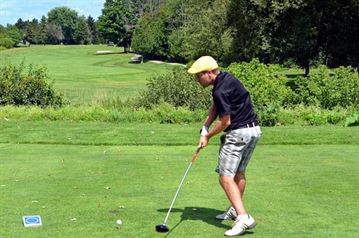 ​
Golf, despite its stark differences from every other ball game (like coping with varied terrains encountered on the course), is similar to them in one aspect- it caters to a largely right-handed population. So, stats that confirm that a major of world champions who play golf with their left hand are naturally right-handed, comes as a surprise. From Sam Adams to Eric Axley, some of the greatest golfers have been left-handed. Why? This article will detail the answer out for you- from why playing left-handed is better. Is it better to can you switch hands while playing to the products available in the market for left-handed golfers. So, sit back while we tackle the obstacles one at a time.

Quick Navigation
Left-handed golf
Left hand vs the right
Why play left-handed?
Does playing with my land hand put me in a disadvantageous position?
What products can I find on the market?

Left hand vs the right

Let’s break this down a little. Does being left-handed put at a disadvantageous position compared to your right-handed peer? Not at all. On an average 1 out of every 30 golf player would be left-handed.

Despite a large number of players being left-handed today, golf courses still remain solely designed for the right-handed player. This can pose a problem if you’re a newbie to the course and need getting used to playing on a field that doesn’t actively cater to your needs.

Most of the general consensus is that- no, there isn’t much of a difference if you’re a left or right-handed player. Think of it like writing if you’re left-handed- it might be tedious in the beginning, but with time and the appropriate tools, you can get just as good at it as your right-handed peers.

Professionals golfers who are left-handed and won on the big stage include Phil Mickelson and Bob Charles. Here’s a fun fact; Canada has more left-handed golfers than the United States. About 30 percent of the players in Canada are left-handed, including Mike Weir.

However, its important to note that golf is entirely different from the baseball sport, where a left-handed hitter would benefit against a right-handed pitcher. Golf is an individualistic sport and it is up to the players themselves to improve and perform under the immense pressure.

Quick tip: if you do end up going to a golf course as a newbie, seasoned player or simply because your interest was piqued, swing the golf club both ways and find out what hand works best for you. Sticking to the hand that works best for you is the best way to sink your teeth in the game.

The underlying causative of most swing errors is largely from right-handed players who have too much energy sedimented in their dominant hand, which overpowers their left hand causing several issues. Problems that arise can consist of too steep of descent, club ascending at impact, collapsing of the left wrist at impact, or early rotation and throwing the club face out of alignment.

It is scientifically proven that left-handers have a distinct advantage when it comes to sports over a person who plays with their right hand. Why? Because a dominant left hand is the perfect combination for hand to eye co-ordination. The brain consists of two hemispheres which perform different tasks, and it’s believed that in left-handers these functions are more evenly distributed between the two sides making the brain more symmetrical.

For example, in a left-handed tennis player the controls of movement and space management are performed on the right side of the brain. Therefore, the process of seeing the ball coming and hitting it are dealt with by the same half of the brain.

In a right-hander this visual information has to be transferred to the opposite hemisphere to direct a player's movement, adding an extra 20 or 30 milliseconds to the reaction time. This time gap is hardly significant, but that combined with the superior spatial skills to co-ordinate movements and reactions- the left-handers have hit the jackpot.

The point is understanding the roles your hands play while swinging and how they need to effectively function together, and which hand should ideally dominate in terms of grip pressure and conscious applied effort or control.

Playing left-handed can be an option if you notice that your dominant hand appears to be passive on the field. Switching over can overcome common swing errors and drastically reduce the number of poor shots.

If you’re a beginner, there are a plethora of videos littered all over YouTube on everything from how-to-swing tips to the proper hand positions to rotation on the downswing. Get a gist of what you’ve to expect before trying your shot at left-handed golf.

Does playing with my land hand put me in a disadvantageous position?

Simple answer to the point? No. In fact some would argue that it is nothing but a hinderance. Imagine playing on a course that is solely dedicated to the right-hand dominant. That being said; there is no lack of left-handed champions in gold. Steve Flesch is in the Top 5 of all-time PGA victories by a left-hander with four wins.

Of course, if the courses and layouts favored the southpaws, we would be seeing more of them on the field. To put things into perspective, left-handed players only get half the options right-handed players do while shopping for clubs (we will touch upon this in the next section).

However, reverse engineering the game is not something that’ll happen overnight. Orient yourself to the field and hone your senses to play with your dominant left hand than trying to swing with your right. With time and perseverance, the results will be seen.

What products can I find on the market?

The list is endless. You can find almost every necessity of the game like drivers, fairway woods, hybrids, iron sets, wedges, chippers, putters, gloves and complete packages catering solely to the left-handed playing community.

However, if you are planning on shopping online, we would suggest stopping by a physical store first, just to get a feel of the products firsthand like shaft flex and lengths.

There are a variety of materials on the market like platinum chrome shafts, graphite, steel and iron shafts. These materials come with high resistance and durability so jot down a budget range while deciding on what materials you’d like on your products.

That being said, happy shopping! As a newbie on the field, things might not go your way for the first couple of times, but it will get smoother with every obstacle you tackle along the course. Pun intended.

We have researched thousands of products for left-handed people.