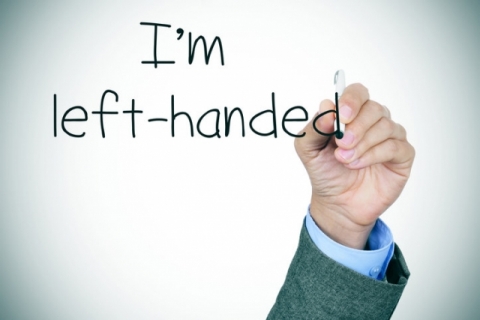 It is useful to be left-handed sometimes, despite being a rare occurrence in human beings.

A puzzling yet interesting habit seen in left-handers is to develop the ability to see better underwater. Research on the phenomenon suggests this is likely to happen to left-handers as they utilize some part of the brain that right-handers mostly do not seem to do so. As to what part of the brain helps them do so needs more research; the study of the human brain is still shrouded in mystery in the 21st century.

Left-handers are supposedly better than their right-handed counterparts at games. This they do so by being more difficult to adjust to than right-handers when the game demands to take a left or a right side. For e.g. a left handed batsman is trickier to bowl to than a right-handed cricketer who is far more familiar to the bowler than the rare left-sided player.

Needless to say, dealing with day-to-day tasks is made a lot easier for a left-handed person. With the copious amounts of brainwork done to adjust to a right-handed world, it is no wonder that the10% of the left-handed population is multitasking human beings, able to do more than a task at a time. Apparently, the transfer of bulk information is easily processed by left-handers due to the simultaneous activation of the brain.

Left-handed people are said to have better memories. Though research remains inconclusive about if this is true for all of them, it has been conclusively said that the ability to have a better memory is closely linked to being a left-hander. One does not even have to be a left-hander to have quicker memories, it is sufficient that he/she belongs to a family of lefties. This seems to suggest that behavioral aspects of one’s body-mind relationship, including hand dominance, is coded in the gene pool of an individual.

Being a left handed could mean having an enhanced visual sense of understanding and expressing over language-based pursuits in the realm of the arts. A career based on this preference would flourish, given that there is data to support the left-handed ability to respond to visual communication. One could be the Michelangelo of the future recognizing this ability within oneself and not trouble over the distinction and rarity of the preference to be a left-hander. Enjoying the uniqueness would definitely serve left-handers better.